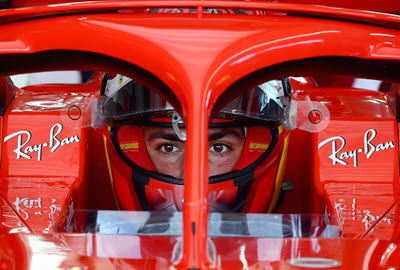 Practice 1 and 2 gave good indications ahead of tomorrow’s Qualifying for the Formula 1 Australian Grand Prix. With Leclerc and Verstappen battling away, could Sainz pull an upset and snatch his first-ever Pole Position in Melbourne?

Ferrari demonstrated their impressive speed at the Practice 1 session at Albert Park track in Melbourne, with Carlos Sainz ahead of Charles Leclerc by a significant margin. Red Bulls may still be hiding their cards this early in the Australian Grand Prix weekend, but Sainz's performance shows that he is not just a placeholder for the team.

Sergio Perez finished Practice 1 in third place, just a tenth of a second behind Leclerc and two tenths ahead of his teammate and reigning World Champion Max Verstappen. Red Bull are keeping their cards close to their chest at the moment, so we should not read too much into their performance yet.

A 3/10th of a second behind Verstappen, Lando Norris finished fifth in Melbourne. Daniel Ricciardo, who ended Practice 1 eighth, is 3/10ths behind his teammate Norris, indicating that McLaren may have finally found the light at the end of the tunnel.

Mercedes had a difficult Practice 1 session, with Lewis Hamilton finishing in 7th and George Russell in 12th. The Silver Arrows seemed to be struggling with grip in tight turns, Russell, in particular, fighting the car on the exit of turn 1.

Alpine is looking strong here in Melbourne, with Esteban Ocon in 6th and Fernando Alonso in ninth after Practice 1. The French team has been steadily improving since the start of the season.

Even though Valtteri Bottas and Guanyou Zhou finished in 10th and 15th place, they were not able to make the most of their Ferrari engine package. Alfa Romeo was kept into the mix as a result, but it was clear that these drivers could have done better.

Yuki Tsunoda (11th) and Pierre Gasly's (14th) results in Practice 1 showed that Alpha Tauri still has some work to do before they are ready to compete with the top teams. The good news is that the Team seems aware of the problems, and they are determined to fix them as quickly as possible.

Sebastian Vettel had a difficult start to the Australian Grand Prix weekend, finishing 13th in Practice 1. His teammate Lance Stroll performed even worse, finishing 16th. Some are asking if Stroll would be driving in Formula 1 if it was not for his father's wealth and influence.

Charles Leclerc topped Practice 2 ahead of Verstappen, the Dutch driver sandwiched by the other Ferrari with Sainz finishing the session third. A resurgent Alonso placed fourth, ahead of Perez 5th. Ocon 6th closed the lineup of drivers within one second from Leclerc. Reliable performance by Bottas, who finished seventh little over a second off the leader of Practice 2. With Mercedes still struggling, the battle for Pole Position seems will be fought between the Usual Suspects, Ferrari, and Red Bull, with Alpine a distant long shot.

Visit Bookmaker.eu to get all the odds for the Formula 1 Australian Grand Prix