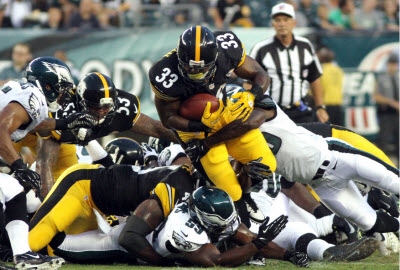 Coming into the fourth week of NFL action, let’s take a look at some of the best picks on the board.

It’s tough to pick a road underdog, particularly in a division as putrid as the NFC South, but Tampa Bay is not a good team. They did beat New Orleans, but Jameis Winston is having real accuracy problems (completing less than 50 percent of his passes in two of his first three games). Expect Carolina to come in and win – but only by two or three. Go with Tampa Bay if you can get this many points on your spread.

Houston at Atlanta (-6.5 at MyBookie.ag)

If you think that a touchdown is a little much for this, remember how quickly the Falcons took off when they were playing Dallas last week and Philadelphia in Week 1. The Falcons have a high-octane offense, particularly at home. Houston is a strong running team, which means that they don’t have a chance if their defense falters. Pick Atlanta to win by at least a touchdown here.

Oakland at Chicago (+3.5 at MyBookie.ag)

The Bears got shut out a week ago, 26-0, by Seattle, with backup quarterback Jimmy Clausen racking up an 8.9 quarterback rating. Clausen returns to the field this week for the Bears, and the Raiders are flying high with an early 2-1 record. This might still be a Bears pick except for the fact that the Bears simply cannot move the ball. Pick the Raiders to win and cover here.

Philadelphia at Washington (+3.5 at MyBookie.ag)

The Washington Redskins don’t have a legitimate quarterback – sorry, Kirk Cousins just doesn’t count. The Eagles have struggled on offense throughout the year, but Washington offers one of the softest defenses they will play. Expect the Eagles to win by at least a touchdown here.

Did you see how Tyrod Taylor threw the ball all over the field at will against the Dolphins last week? Expect him to do much the same this week against the hapless Giants secondary. Eli Manning can also move the ball, but the Bills will provide a stiff test on defense. The Bills will prevail here – handily.

The only reason why the Saints are favored here is because the Cowboys have Tony Romo on the sidelines and Brandon Weeden under center. Drew Brees is likely to play, but if his shoulder isn’t doing well, Luke McCown could come on again. The Cowboys’ defense is up to the task of containing the Saints. If Weeden plays like he played last week, the Cowboys have enough weapons to cover here.

We have 26 guests and no members online