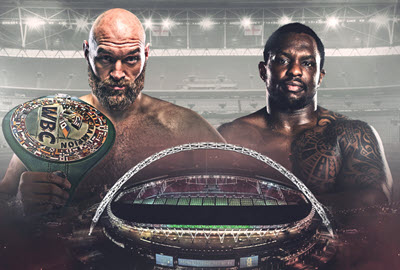 You won't want to miss this week's fight! Two of the world's best heavyweights will go head-to-head. Who do you think will win? Tyson Fury and Dillian Whyte will square off in London, England, at Wembley Stadium. There are tens of thousands of boxing fans there to see both British boxers fight it out. Tyson Fury (31-0-1 with 22 knockouts) is the most intimidating boxer in the sport, while Dillian Whyte (28-2 with 19 knockouts) was the WBC interim heavyweight champion. Fury is 6’9″, which makes him the tallest heavyweight champion in history. Whyte is 6’7″.

In the States, this fight will be available through ESPN Plus with the card starting at 2 p.m. ET, while Whyte and Fury are expected to enter the ring at 5 p.m. ET! The card will be headlined by two super middleweights in Anthony Yarde and Chris Eubank Jr.

Tyson Fury is a significant favorite by the boxing betting odds, but that’s not surprising considering he has never lost a fight before in his career and only had one blemish with the draw against Deontay Wilder. If Whyte can pull off the win, it will register as a significant payout. Given those odds and for anyone who is new to betting on boxing, one might be tempted by this opportunity.

As the fight nears, there will be betting on decisions. You will be able to bet on whether the fight is decided by KO, TKO, or decision, and you can bet on which boxer will win the fight in that fashion as well. as the odds. Betting in boxing is very similar to that of other sports. The number of rounds can be bet on, and those who win their bets will be given a percentage of the money wagered back. There are also side bets. For example, you can make a bet on whether or not there will be a knockout during the fight as well as the outcome.

Tyson Fury is the most intimidating heavyweight boxer out there. His incredible dexterity and stamina for someone that is 6’9 make him a hard opponent for any other boxer, not to mention that he has a massive 85-inch reach advantage over everybody else. Fury captured the English heavyweight title early in his career. His undefeated streak stood at 24-0 before he embarked on a fateful, one-sided bout with unified heavyweight champion Wladimir Klitschko.

His victory over Klitschko proved that he was no joke. Fury's size and reach allowed him to control the decade-long champion and establish himself as the new king of the division. After suffering an unfortunate decision in his fight with Deontay Wilder, Fury took little time in knocking him out to win the WBC and Ring heavyweight titles. That set up a trilogy fight with Wilder last October, and he again knocked out his opponent to prove that he was the better fighter. .“He’s the pound-for-pound king, he doesn’t have any weaknesses, he is not a paper champion, and there is nothing that can be done to stop him. I think he does need somebody to raise his level of competition and put him on his back foot for a little bit and make him work for it.

If Fury wins this fight, it would be likely that he will face either Oleksandr Usyk or Anthony Joshua. As it has been said before, Fury wants to have a fight with Joshua and will likely have an advantage over Usyk as he is not at all familiar with the heavyweight division.

This is the biggest fight to date for Dillian Whyte. He was 16-0 and unbeaten before taking on Anthony Joshua, but he lost in the seventh round to Joshua to drop his first fight. Whyte has won tough fights against Derek Chisora twice, Robert Helenius, Lucas Browne, and Joseph Parker - and he claimed the interim WBC heavyweight belt with a unanimous decision win over Oscar Rivas.

We witnessed Whyte's victory over Mariusz Wach and then his bout with Alexander Povetkin. White was disappointed by Povetkin, getting knocked down in the fifth round to lose a title shot. However, he was able to secure an 11th-round TKO win over Povetkin in the rematch in Gibraltar last March.

The underdog in this matchup, Whyte, is going to have a tough time against Fury’s 6’9 height and 85-inch reach. It is going to be difficult for Whyte to get close and Fury will be an uncomfortable match-up because of the punishment he'll inflict.

The Bookmaker app gives betting odds for live sporting events every day! The user-friendly interface on your mobile phone makes placing bets just as easy on the go. Get live mobile betting lines and start wagering on thrilling action at BookMaker Sportsbook!