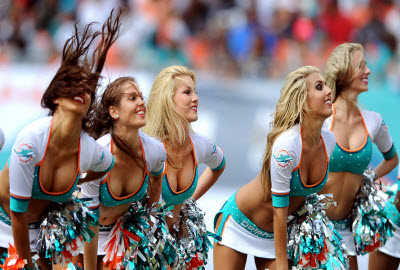 The over-under prop bet can be a tough pick to choose. However, since that number is set at 43.5 in the NFL opener between Washington and Miami, you can put your money on the under.

Why? Well, Washington might not score at all. Robert Griffin III has been benched, and Kirk Cousins will be the starting quarterback. As much as Cousins likes to throw interceptions, and as muddled as the Redskins offense was last year when anyone but Colt McCoy was leading it, this could be an easy shutout for the Dolphins – or at least a single-digit scoring total for the Redskins. Ndamukong Suh, one of the newest Dolphins, will make life miserable for Cousins (and anyone else the Redskins put in at quarterback.

What about the Miami offense? Ryan Tannehill is a rising talent at quarterback, and the skill position players around him have been fairly underrated so far. The team is fairly deep at wide receiver, with free agent Greg Jennings (59 receptions, 6 touchdowns, 742 yards in Minnesota in 2014) coming in. Kenny Stills (63 receptions, 3 touchdowns, 931 yards in 2014) is the other starter. However, they also have West Virginia star DeVante Parker coming in from the draft.

The Redskins do have some skilled players on offense. Running back Alfred Morris had 1,074 yards and 8 touchdowns last year. Wide receiver DeSean Jackson (56 receptions, 6 touchdowns and 1,169 yards in 2014) can catch fire when he is properly motivated. Pierre Garcon is another quality receiver (68 receptions, 3 touchdowns, 752 yards).

Rookie running back Matt Jones from Florida had a solid preseason too. Even so, with the shaky quarterback situation, the Redskins will rely on their defense to keep them in games. And that is a shaky unit to be relying on.

All of this is to say that I see this game turning out with something like a 28-6 score. That's a total of 34 points – and well below the over-under line. No thing is a sure bet in this parity-crazy league, but of the bets that are available for Week 1, you'll want this one.

Exclusive offer for our readers from MyBookie: 110% bonus to new players this year. 100% sign up bonus and 10% futures bet on your favorite team to with the Super Bowl. Click here to learn more.

We have 32 guests and no members online