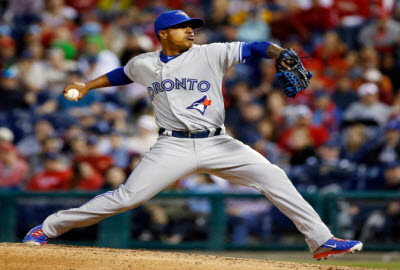 After dropping the first two games of the American League Division Series at home, the Toronto Blue Jays have a chance to come back to the former SkyDome and make amends.

They beat the Texas Rangers twice in Arlington to knot the series at 2-2 heading into Wednesday's Game 5 (4:07 PM ET, FS1).

The American League Divisional Series has been excellent for the road teams as Texas won the first two games in Toronto, and then the Blue Jays returned the favor in Texas.

Bet on baseball at Bovada and get a free 50% bonus.

It took some creative managing to put the Jays in this position. David Price (2.78 FIP) seems to struggle against the Rangers, who have a combined .739 OPS versus the Cy Young-winning lefty. As a result, Toronto used Price in a relief role on Wednesday, starting RA Dickey in an 8-4 win as –154 road favourites on the closing line.

That sets up future ace Marcus Stroman (3.54 FIP) to start Game 5 at home. He's been a bit lucky since coming off the disabled list in September, posting a .237 BABIP against in four regular-season starts. But the Jays won all four of those starts before losing 6-4 in Game 2 as –175 home favourites.

The winner that day, Cole Hamels (3.47 FIP), is expected to start Game 5. Hamels didn't get the win in Game 2's 6-4 14-inning marathon, but he did his part. The southpaw went seven innings, allowing four runs (two earned) on six hits while striking out six with no walks. He allowed a first-inning solo shot to Josh Donaldson, but Hamels made big pitches when he needed to. He has proven himself as capable of handling pressure, winning the 2008 NLCS and World Series MVP and is now 7-4 in 14 postseason starts with an ERA of 3.05.

Get your MLB odds at Bovada today.

We have 35 guests and no members online