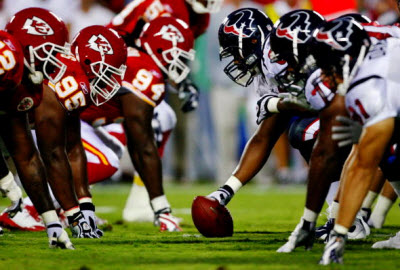 The matchup between the Kansas City Chiefs and Houston Texans has the Chiefs as only a one-point underdog on the road.

This should tell you that oddsmakers are already favoring the Chiefs to come out ahead. If you think about it, the Chiefs will be better on the passing game this year, now that Alex Smith has Jeremy Maclin, Jason Avant and Albert Wilson to throw the ball too as well as Travis Kelce at tight end. Even though J.J. Watt gets huge press in Houston, the Texans were only 21st in the league in pass defense last year.

It's true that Smith is only an average signal-caller, but the Texans only have Brian Hoyer to offer in response. So I would definitely pick the Chiefs in this game.

The Oakland Raiders are a 3.5 point underdog against the Cincinnati Bengals going into Week 1. While the odd factors in the Raiders organization almost always point to chaos and trouble, the opposite is true this year.

The Raiders have actually brought in a decent coach (Jack Del Rio) for the first time since the Gruden era. Oakland is improved at just about every spot in comparison to this point last year, and the coaching of Del Rio will ensure that there are fewer stupid mistakes.

Oakland will pound the ball on the ground, and Derek Carr will send the ball down the field at targets like Amari Cooper.

Cincinnati is only 1-6 against the spread in its history in Oakland. I'm saying that Oakland will not only cover but will win straight up.

Dallas plays the New York Giants in a Week 1 Sunday night home tilt. A lot of people are high on the Cowboys, but that 7-point spread might be a little too high. The Giants have strong weapons for Eli Manning as Odell Beckham Jr. and Victor Cruz are ready to go. The Giants pass rush will still falter as Jason Pierre-Paul has finally just reported for his physical after losing a finger in a bizarre fireworks accident on Independence Day.

Tony Romo will lead a solid offensive attack for Dallas, but the committee of running backs has the big shoes of DeMarco Murray to fill. The Giants might not prevail, but I don't see Dallas winning by a touchdown either. I see this as something like a 31-30 affair.

So here are your top three bets: take the Chiefs to beat the Texans in Houston. Brian Hoyer might get his team to an early lead, but he will throw that late pick to give the Chiefs new life. Andy Dalton has a hard time playing in big road games. While a Week 1 tilt in Oakland might not qualify as a “big game,” that stadium has been a house of horrors for the Bengals.

Look for that to continue. Finally, you might buy into the Cowboys hype later on this season, when their suspended players like Greg Hardy and Rolando McClain come back, but for now, they are tough to pick as seven-point favorites against almost anyone not in the NFC South.

Exclusive offer for our readers from MyBookie: 110% pre-season bonus to new players this year. 100% sign up bonus and 10% futures bet on your favorite team to with the Super Bowl.Click here to learn more.

We have 88 guests and no members online