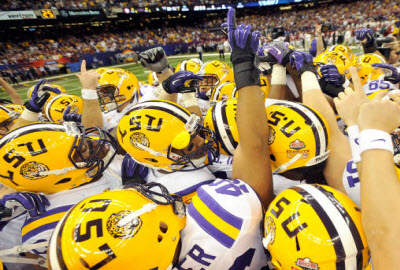 Expect a Tigers-on-Tigers catfight this Saturday (3:30 PM ET, CBS) when No. 13 LSU welcomes No. 18 Auburn to Tiger Stadium in Baton Rouge.

There are still some non-conference games to take care of in Week 3, but the SEC will be in the spotlight this College Foorball Saturday  when the No. 13 LSU Tigers welcome the No. 18 Auburn Tigers to Baton Rouge. LSU opened as a 7-point favorite at –105, moving to –115 at press time after some early action on the home side.

Neither of these Tigers has covered the spread this season. Auburn has played and won twice straight up, but it took overtime to beat the Jacksonville State Gamecocks (+40) 27-20 last week. That's Jacksonville State from the Ohio Valley Conference in the FCS. Louisiana State has played just once, edging the Mississippi State Bulldogs 21-19 as a 4-point road chalk.

This figures to be a tough matchup for Auburn. First-year starter Jeremy Johnson has already thrown five interceptions this year, and he'll be facing a very tough LSU pass rush. Auburn is also missing a number of injured players on offense. LSU will be looking for revenge after dropping a 41-7 decision to Auburn (–7 at home) last year. Auburn is 2-3 SU and 4-1 ATS in their last five meetings.

We have 43 guests and no members online