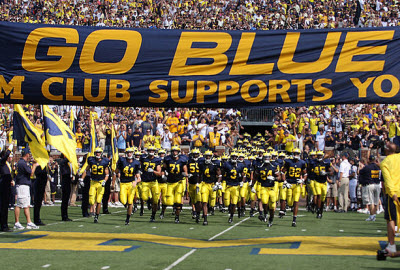 No. 13 Northwestern Wildcats may be ahead in the polls, but No. 18 Michigan Wolverines will be huge favorites for Saturday's game in Ann Arbor kicking-off at 3:30 PM ET on the Big Ten Network.

The Wolverines  are already enjoying success under new head coach Jim Harbaugh. These are two of the very best defensive teams in the FBS; each team has recorded two shutouts this year to drive the under to a perfect 5-0 record. But are bettors overlooking Northwestern?

It depends who you talk to. Not everyone is impressed by the strength of schedule that Michigan has faced this year, and meanwhile Northwestern recorded upset wins over Stanford (–11 at home on the closing line) and Duke (–4 at home). However, Sports-Reference rates the Wolverines as having the more difficult schedule thus far; Michigan's only loss was to a Utah team (–5.5 at home) that sits at No. 5 on the AP poll.

The Wolverines have won each of the last four games since resuming this Big Ten series in 2011, but Northwestern covered twice, including last year's 10-9 loss as a 2-point home dog. Another low-scoring game is likely this Saturday. The Wildcats have the under at 5-0 this year, as do the Wolverines, and both teams rank in the Top 6 on the S&P+ defensive ratings at Football Outsiders.

We have 17 guests and no members online