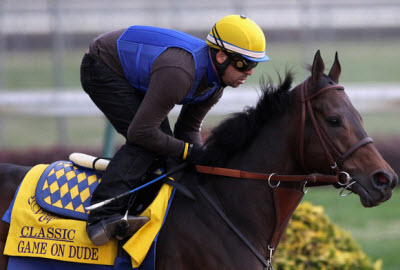 Game On Dude is the 8/5 Favorite for the 2013 Breeders’ Cup Classic while challenger Mucho Macho Man odds sit at 5/1.

He couldn’t get it done last year, but Game On Dude is the favorite to win Saturday’s 2013 Breeders’ Cup Classic (G1, 1 1/4 mile, dirt), the main event of this year’s Breeders’ Cup World Championships at Santa Anita Park. Game On Dude was installed as the 8/5 favorite in a very tough field that also includes the top four finishers from the 2012 Classic.

The Bob Baffert-trained gelding finished seventh in last year’s race, but he hasn’t lost since, going 5-for-5 in 2013 and sweeping the three grade 1 California handicaps: the Santa Anita Handicap, the Hollywood Gold Cup and the Pacific Classic. The only other horse to take down all three races in the same year was Lava Man in 2006.

We have 25 guests and no members online