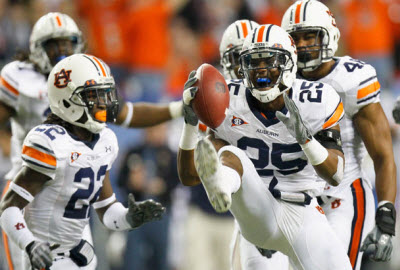 It's never a dull moment when the Alabama Crimson Tide and the Auburn Tigers meet at the Iron Bowl.

Alabama need two more wins to secure a place in the College Football Playoff. It all starts this Saturday in the annual Iron Bowl game against Auburn T. Kick-off is at 3:30 PM ET on CBS, with Alabama favored by 14.5 points at press time.

Saturday's game (3:30 PM ET, CBS) won't be the first time Auburn has been a double-digit Iron Bowl home dog. That was the case in each of their last three games at Jordan-Hare Stadium, with the Tigers going 1-2 SU and 2-1 ATS. In 2013, Chris Davis returned a missed field goal 100 yards on the final play to give Auburn (+10) a 34-28 victory and ruined Alabama's unbeaten season.

The Tide have already lost 43-37 to the Mississippi Rebels (+8 away) this year, but they can still make the College Football Playoff with a win over Auburn and another win over the Florida Gators in the SEC title game. Alabama is the +150 favorite on the FBS Championship futures market, and RB Derrick Henry is the –200 favorite to win the 2015 Heisman Trophy.

We have 21 guests and no members online