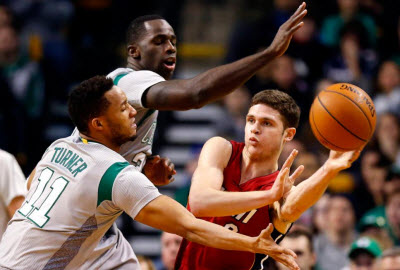 The Heat might have the best starting five in the NBA, but their bench will be thin when they host the Jazz this Thursday night.

Miami has traded point guard Mario Chalmers to the Memphis Grizzlies in a salary dump, and shooting guard Gerald Green has been suspended for two games for conduct detrimental to the team.

Bet on basketball at Bovada and get a free 100% bonus.

Chalmers and small forward James Ennis were dealt to the Grizz on Tuesday for point guard Beno Udrih, power forward Jarnell Stokes and a future second-round pick. The Heat were looking for a third team to absorb Udrih's contract, but they couldn't find any takers. Until Green's return, Miami will likely rely on young guards Tyler Johnson and Josh Richardson to play significant minutes in the backcourt.

The Jazz could also be short-handed for Thursday's matchup (7:30 PM ET). Center Rudy Gobert is listed as questionable after spraining his left ankle in Tuesday's 118-114 loss to the Cleveland Cavaliers (–6 at home). With Gobert in the middle, Utah has allowed a league-best 89.7 points per game; Miami is second at 90.1 points allowed. The under is a combined 12-3 for these two clubs to start the new season.

We have 28 guests and no members online