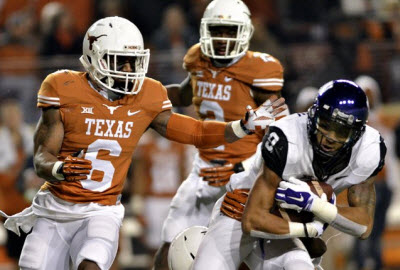 This week in the NCAA, there are a number of interesting picks. Let's see how some of the spreads shake out.

TCU was favored by 37 against SMU, but then SMU roared back to get within 5 in the Frogs' stadium a couple of weeks ago. However, TCU has shown they can score on just about anyone – and the Longhorns' defense is suspect. But can the Frogs get enough defense to win by more than two touchdowns? Texas quarterback Jerrod Heard has energized the offense, and the Longhorns have been this close in losses to Oklahoma State and Cal. TCU has a weaker statistical defense, ranking #72 in Football Outsiders' ratings, behind....Hawaii, Louisiana-Monroe and Connecticut. So even though Texas has two tough losses to shake off, it's hard to see TCU beating them by 15.

The West Virginia Mountaineers are an enigma, and when they play at home it's almost never a good idea to pick against them. However, this week they are in Oklahoma. But how good are they really? Well, Football Outsiders has them ranked at #37 in their FEI ratings – but at #3 in their S&P+ ratings. In the last three contests with Oklahoma, they have been three close losses. Against the spread last year, they were 4-1 when they were an underdog, while Oklahoma went 2-4 as a favorite at home. West Virginia covered against Maryland in huge fashion last week, winning 45-6. So I like the Mountaineers to keep it closer than seven.

Minnesota at #16 Northwestern (-5 at MyBookie.ag)

Here's an interesting statistic. Road underdogs in games where the over/under is 48 1/2 or less have gone 681-562 against the spread between 2005 and 2014. This matchup features two strong defenses and two weak offenses. That's why the over/under here is an unusually low 40. So I'm looking for a final score here in the neighborhood of 21-17, 24-20, 14-10, or even 10-7. So the Gophers could lose any of those, but still cover that spread, which I'm picking them to do.

This tilt takes place in AT&T Stadium in Arlington, Texas, and it has been called the Texas Farm Bureau Insurance Shootout. These two offenses are the best in all of college football, according to the S&P+ ratings from Football Outsiders. The defenses are awful (Baylor #94, Texas Tech #118), so this will be yet another shootout in the Big 12, on the heels of the barnburner last week between Tech and TCU. Last year, when these teams placed, Baylor won 48-46 – the those 94 combined points were their lowest total since 2010. So the biggest question is whether Baylor can get – and stay – 15 points ahead of Baylor. The Bears could score a touchdown on every possession and still not win by 15, and that's how I'm picking this.